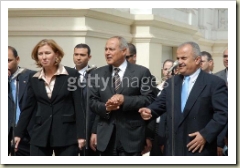 If the minister said so ,it would be great but I hope he is real and honest about it because from the pictures of the press Conference in Cairo I see them so happy

Ok we waited along and our officials are speaking nonsense ,ignoring the solid facts they have under their noses ,and what we got now instead an accusation that Egyptian army killed Israeli POWs in the 1973 war !!

Despite this news will make people laugh especially the military who fought back in 1973 , who know very about the 5 stars treatment the Israeli POWs got but I know that internationally we will find ourselves in the position of the victimizer instead of the victim, the shifting of truth will place and the Zionist lobby is there to help

For God Sake let the remainings of the officers in mass graves out let it speak and scream , let be their DNA .

The Israeli POWs had trips to visit Egypt famous sights when they were in our hospitality !!

It is a try

And the one thousand miles walk starts with a mile

I don’t know if I should be very thankful to the first channel in the Israeli TV for broadcasting “Rush Shaked” {The Spirit of Shaked} ,or what since then the reports began to run in cats and dogs

Hopefully the Egyptian Government would something real this time