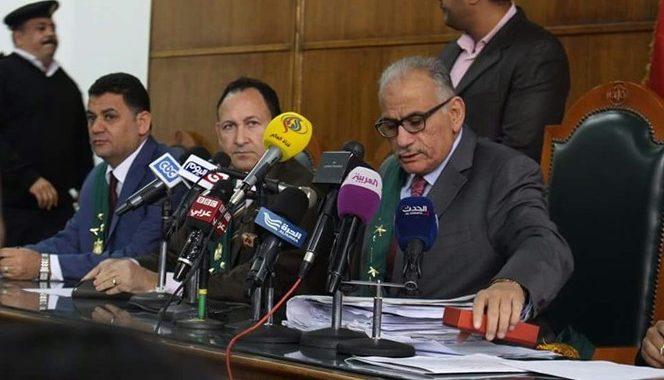 Only on 21 January 2018, the Supreme Administrative court made its final verdict rejecting the Egyptian government’s appeal and upholding the 2008 court ruling.

The State lawsuits authority added that the Egyptian foreign ministry followed the Shaked documentary in 2007 and raised the matter with Israel as well as the Red Cross.  The government’s lawyer added in its appeal that Camp David accords and suspected that the families of the POWs are related to the POWs in the first place !!

According to the Supreme Administrative court’s reasoning that the documents presented to it that the IDF committed war crimes against Egypt and the Arab military and that the Egyptian government failed in prosecuting Israel criminally as well in demanding compensation international for the victims.

Ironically, the State lawsuits authority brought up once again the jurisdiction of the Supreme Administrative Court in its lawsuit just like Tiran and Sanafir.

There has been no reaction from the Egyptian foreign ministry about this court ruling yet.

It did not stop at this , the MB members and supporters kept posting the Egyptian soldiers’ humiliating photos while they were in the IDF capture to tease the Nasserites on social media websites with no respect to all those who were killed and tortured during their torture.

The members of the Muslim brotherhood were actually gloating over the defeat of the Arab people and the death of thousands on 5 June 1967. In 2007 the MB used to speak frequently about “Shaked Affair” but now the whole thing is forgotten.I remember that Ikhwan Online used to follow carefully the case of the Egyptian POWs of 1956 and 1967.

The MB used to criticized Mubarak and his regime for neglecting the POWs file and unfortunately I do not see any difference in time of President Morsi.

END_OF_DOCUMENT_TOKEN_TO_BE_REPLACED

It is enough that his last call before stepping down was to Ben Eliezer !! Some will not like what I will say but how come Mubarak was an officer in the Egyptian army and headed our air forces once upon time !! Ben Eliezer killed our unarmed Egyptian POWs in 1967 and he does not deny it for God sake yet they seemed to be close friends to the level that Mubarak spoke to Ben Eliezer for 20 minutes in his last international call as a president !!

Anyhow Ben Eliezer can feel very sad for Mubarak but he has to be worried now because the Egyptian POWs case seemed to be revived again by the Egyptian revolution.

The Egyptian Arabic socialist party has demanded PM Sharaf and the supreme council of armed forces to implement the administrative court rule to demand a UN and security council investigation concerning the Israeli war crimes against our POWs during the Suez war , the six days war and 1973 war.

FM Nabil El-Araby has announced that Egypt is going to join the ICC at last , this great news means we can sue Israel in front of the ICC.

Despite we are busy in our revolution that has not finished yet , we have forgotten the rights of our fallen soldiers , Ben Eliezer should be very worried.

The book’s author is researcher Abdel Razek Said Soliman and its introduction is written by Dr. Ibrahim El-Bahrawy who mentions in his introduction the “Fortunes of a fool” novel . The book which is an actually a study depends on the Israeli literature and how it showed incidents of war crimes against out Egyptian POWs.

The book also show examples of the Israeli literature that covered the 6th of October war.

The book is currently available in bookstore.

This rare video shows you how the Israeli injured POWs were treated in Egyptian Captivity in 1973, this video shows you a group of Israeli POWs from IAF at Maadi military hospital.

Egypt’s first lady then Jihan Sadat refused to visit at first the Israeli injured POWs at Maadi hospital when she had visited the hospital , but the officials there convinced her to pay a visit the Israeli POWs because we treat our POWs in a better way.