Do you remember the mass grave for Muslims in Eilat last month ?? AlreadyÂ  the Defense and National security committee in the Egyptian assembly should have discussed it yesterday ,unfortunately there were no news regarding this discussion as yesterday the El-Malt’s CAO report was the main topic in the media for the last two days and seriously I have to say it was much important and it is expected to take all the attention whether from the media or the members of Parliament.

On the other hand there is a great historical debate about the mass grave and its location , also it is expected thing , Um Rashrash is already a center of debate of whether it is an Egyptian land or not .

We did not fight the Israelis in any battle in the Um Rashrash region. These remains could be for Jordanian officers and soldiers as this region was following the Jordan

Of course the old veteran and famous military historian had contradicts totally with what the Front for restoring Um Rashrash is saying , especially the front includes many historians and many military personalities like General Saad El-Din Shazaaly.

Still it is very easy to know to which army those people used to belong to , through photos of their military uniforms or the remains of their uniforms to be accurate , also through the photos and the Holy Quran found in the site, we can know in which country it was printed and thus it will be an evidence for us.

Strangely there is no one from Jordan claimed that these were remains for Jordanian Battalion till now.

The mass grave that was found in â€œUm Rashrashâ€ at Eilat is believed by many parties in Egypt including military experts that it belongs to the Egyptian army officers and soldiers who were killed in the village in year 1949 in the â€œOperation Uvdah ((Established fact)) â€œ which was led by the current Israeli President Shimon Perez.

On the next 13th of January 2007, the Egyptian Parliament will discuss the case based on the request of PM â€œTalaat El-Sadatâ€ ((The Nephew of late President Sadat)) , the request was a demand to the committee of the National security in the Egyptian assembly to discuss the findings of the mass grave as a possible mass grave for Egyptian soldiers and officers who were killed in 1949 in the Operation â€œUvdahâ€. PM â€œEl-Sadatâ€ in statement for Al-Arabiya.net said that it is important that the Egyptian foreign ministry and other specialized official parties in Egypt to follow the case to know to whom this mass grave belongs to. He continued saying that he believed that the mass grave belongs to the Egyptian force that was in â€œUm Rashrashâ€ when Perez and his Israeli force entered the village and that it would be easy to check from the names and the history of those 350 officers and soldiers from their family if the regime cooperated this time and did not act as in the Previous POWs case.

I am happy that a man like â€œTalaat El-Sadatâ€ is neglecting the issue like the rest of the PM , already â€œEl-Sadatâ€ discussed in the Parliament the POWs case and â€œUM Rashrashâ€ case and currently â€œThe peopleâ€™s front to restore Um El-Rashrashâ€ chose as a general secretary to the front which includes many public and military personalities including General Saad El-Shazely. The front believes that â€œUm Rashrashâ€ village where the mass grave was found is originally an Egyptian land that Israel had occupied in 1949 and that it must return back immediately. Already the foreign ministry last year issued an official statement saying that â€œUm Rashrashâ€ was under the Egyptian control only till 1906 when the Othman Empire along with Great Britain drew new maps for bordering that did not consider Um Rashrash an Egyptian land but Palestinian land. Of course the front denies this and saying that they own more than 700 historical documents that prove the Egyptian identity of the land even after 1907.

So the war crimes against our POWs did not start in 1956 but in 1948, well I changed the tagline of the website to include 1948 and insh Allah I working on a section to include all the details of the Uvdah massacre because Uvdahs do not stay buried forever

First I did not receive yet from the Al-Aqsa foundation , hopefully they will reply on my requests.

Second the Al-Jazeera made a report about it

Third here are the new information and new photos

It is believed according to Al-Jazeera that this mass grave goes back to 1948 war between the Arabic armies and the Israeli Army. If this is true then we will have war crimes against the Arab armies older than 1956 committed by the IDF because according to the Al-Aqsa foundation which is the only Arabic Islamic party investigated the mass grave ,the position of the bodies and their remains go with the position of people who were executed ,someone must have executed them and according to the findings they were Muslims , they had not been shot by other Muslim Arabs for sure in 1948 as all the Arab armies were together not against each other

If these remains are for Arab soldiers killed in 1948 , they can be Egyptians , yes it will not change anything except the date

even in 1948 who was fighting in this area ?? some say they could be Jordanians and it is high probability still the location and how close it is from the Egyptian borders make me believe they will turn to be Egyptians

Still it is hard to determine this with the lack of historical accurate reports about the 1948 war , I feel sad that My grand father is not here as he was a military correspondent in 1948 , he could have helped me so much

Here are the photos 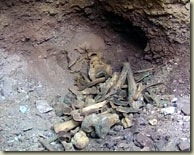 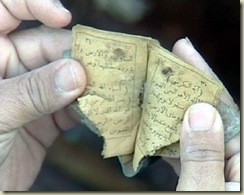 The Holy Quran , The Korsy Ayat , it is amazing how it is still there after all these decades whether it goes back to 1948 or 1967

First of all Happy new year to everyone

Second of all I am sorry that there was lack of updates in the website ,I am sorry it is my mistake ,I apologize again

Third , I know about this news from couple of days “thanks to dear friend Wael Abbas“ but I did not publish anything because I did not have any informationÂ  more than that the Israeli press was speaking about mass grave for Egyptian POWsÂ  found in Eilat / Um Rashrash in Israel , and so I could not publish anything without any confirmation especially I felt that it could be among the current war of the words between the Egyptian regime and the Israeli officials.It seemed illogical to me that the Israeli Press itself would speak about Mass grave for the Egyptian POWs inside Israel itself proving the occurrence of war crimes ,it did not make a sense not to mention I searched every single Israeli newspaper on the web and I did not find anything still I kept it in my mind

Today I found that this news may hold part or most of the truth according to the short article published by Daily El-Masry El-Youm Egypt’s best selling daily newspaper .

It turned out the Al-Aqsa Foundation for the Reconstruction of Islamic Sanctities had discovered an unknown mass grave for Muslims in the city of Eilat. I checked from the official site of the foundation and found more interesting details about the incident

You can find more about the foundation and what it had done from their official website here and there in Arabic language.

Now to what We conclude from all this :