END_OF_DOCUMENT_TOKEN_TO_BE_REPLACED

Today is the 45th anniversary of the Six Days War defeat in 1967. From 45 years ago starting from early morning thousands of Egyptian soldiers and officers did not know the hell they would face as POWs after hours in Sinai.

We will never forget till their rights are fully restored and they are properly remembered in Egypt.

END_OF_DOCUMENT_TOKEN_TO_BE_REPLACED 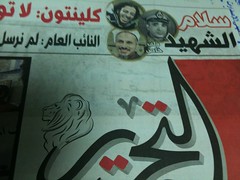 END_OF_DOCUMENT_TOKEN_TO_BE_REPLACED

Egyptian POWs website is back after nearly a year or less from technical problems and as neglect from my side to be honest. I could not find time to fix these problems except now.

A lot of things took place and happened since the last time I posted here whether in Egypt or the Middle East when it comes to POWs news. Aside from the Galid Shalit and Palestinian POWs swap and from shocking POWs treatment in Libya after the revolution , there are some updates to our file , the Egyptian POWs file.More dark secrets have been revealed through out the past year

Tomorrow is the National Martyr’s day in Egypt and today Field Marshal Tantawy and the military commanders of SCAF and Egyptian army zones put flowers on the tombs of the Unknown soldiers throughout the country. I wish that our Egyptian people will do this next year on their own. I think we should start with schools and teach our students to pay respect to our fallen heroes in wars and in our revolutions as well.

END_OF_DOCUMENT_TOKEN_TO_BE_REPLACED

Now there is a good news that sooner insh Allah the file of the Egyptian POWs will be opened again , I am not going t reveal anything except that this revolution we have had will revive the case of Egyptian POWs again.

It is enough that his last call before stepping down was to Ben Eliezer !! Some will not like what I will say but how come Mubarak was an officer in the Egyptian army and headed our air forces once upon time !! Ben Eliezer killed our unarmed Egyptian POWs in 1967 and he does not deny it for God sake yet they seemed to be close friends to the level that Mubarak spoke to Ben Eliezer for 20 minutes in his last international call as a president !!

Anyhow Ben Eliezer can feel very sad for Mubarak but he has to be worried now because the Egyptian POWs case seemed to be revived again by the Egyptian revolution.

The Egyptian Arabic socialist party has demanded PM Sharaf and the supreme council of armed forces to implement the administrative court rule to demand a UN and security council investigation concerning the Israeli war crimes against our POWs during the Suez war , the six days war and 1973 war.

FM Nabil El-Araby has announced that Egypt is going to join the ICC at last , this great news means we can sue Israel in front of the ICC.

Despite we are busy in our revolution that has not finished yet , we have forgotten the rights of our fallen soldiers , Ben Eliezer should be very worried.