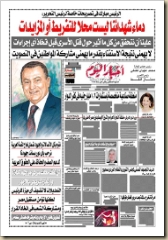 Egypt willÂ Â notÂ give upÂ the rightsÂ of her sons and martyrs .. We will practice our rights and take all necessary actions if the allegations of killing Egyptian POWs during the war 67 turned to be true, but we need to check allÂ what saidÂ on this issue !!

but I am surprised that he considered all what happened in 1967 to be allegations that needed to be proved , pardon me but Mr. Hosni Mubarak was in the army ,in the air forces during the 1967 war ,yes he was a teacher in the Air forces school then but all Egyptians knew about the crimes that happened in Sinai , all the people who had a contact with the army and its officers , only you had to go to the nearest military hospital to know from the wounded officers and soldiers how they escaped from the hell.

Another thing ,why only the concentration is limited on the POWs of 1967 , what about the POWs of 1956 , why they are always forgotten despite the fact we have a solid case against the Israeli generals likeÂ  Biro who confessed to kill the unarmed civilians and POWs across Sinai in 1956 , is n’t the confession the master of evidence !!??

Today also the foreign Minister of Egypt Mr. Ahmed Abu El-Gat gave some statements to the Middle East News agency , which is the official State News agency in Egypt saying in the context of the President that Egypt won’t give up its right but all what we need is documented authenticated evidence not press reports even from the Israeli governmentÂ , with my all respect what is more documented and authenticated that mass graves and former soldiers and officers testimonies !!