In year 1995 after the stories began to surface whether from Israel or from Egypt, Al-Ahram public newspaper in a very rare move for a publication issued and operated by the state’s order formed an expedition for investigation in Sinai itself, the expedition included historians, journalists, photographers and more important the veterans from 1967 especially from the POWs, the expedition arrived in Al-Arish to reveal bitter facts that supports all the allegations of war crimes against the Egyptian POWs in Sinai during the six days war 1967 thanks to the veterans and the great honorable people of Sinai?s memory who still remember very well what happened despite all these decades , they still remember each mass grave ,its location and how many they buried in it , all what they wanted is someone to come and ask until ,someone to care.

Despite the importance of this expedition from what it had revealed and how it made it to the international headline like the CNN international, the Egyptian government despite its ownership to Al-Ahram newspaper didn?t care or even give any attentions to t

he revealing of that important expedition as it were not there, they listened to the red cross claims only that nothing took place against the international laws ,discrediting its own people making them appear like some sort of liars despite of what was found from bones all over Al-Arish , whether under the Al-Arish airports or the mass graves the great people of Al-Arish made to our men !!

Strangely the government wasn?t the only who ignored this expedition but even the Al-Ahram newspaper itself, it ignored totally and it seemed to me that its administration had erased the expedition and its findings from the archive totally as they didn?t mention it in their coverage for the Shaked affair in year 2007, already I didn?t find about it except by coincidence through search in Internet when I found articles about in CNN international ?with pictures? and Time magazine. 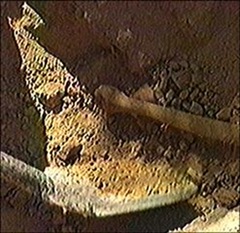 According to the Time magazine this expedition was a semi-official, the guide of the expedition was former air force officer Abdel Salam Mosa, 55 years old then, he was taken as prisoner by the IDF during the six days wars.

Mr. Mosa helped the searchers to find a mass grave that contained human bones for approximately 90 people according to their estimation, Mr. Mosa remembered how the Israeli troops ordered the prisoners in that location who were from the civilians and military to stand in one line then they opened fire at them at one, how they were dead and when they ordered the other POWs including Mr. Mosa to burry them.

At least those 90 people were lucky enough to be buried immediately, others were not that fortunate as their dead bodies to be rot in the desert sun if it were not for the great honorable people of Al-Arish who buried them after the departure of the Israeli forces.

They would nail the prisoners? hands to the trees like this and shoot them

Mr. El-Malah demonstrated how by raising his hands behind his head 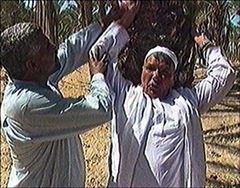 Another villager Soliman Salama showed the a second grave 27 KM away where he said that he had seen another execution process for about 30 Egyptian soldiers without a trial after their surround.

That expedition is the one that we really need if we want really to take back our rights seriously, the government instead of relying on the Israeli governments should support and sponsor expeditions like that along with veterans, locals, historians, searchers and more important forensic experts, if the Egyptians can solve the mystery of how king Tut had died from thousands of years B.C, I believe they can tell us exactly what happened to these bones, I think modern science can help us to do so